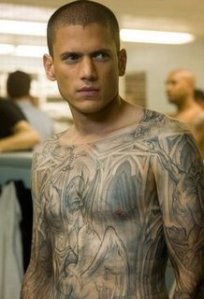 Young male with plenty of tattoos, but still room for improvement

Well, it’s that time of year again, when suddenly we realize that the dream is over and it’s back to the real world. (And no, that’s not because of the Democratic National Convention, though I guess it could be.) No, it’s that end of summer feeling, which in this kneck of the woods is shortly followed by that Expect Snow ANY DAY NOW feeling. It’s coming.

Anyway, I figured that over the next few weeks, much like the last few weeks, my posting contributions are gunna be spinelessly minimal, but thought I might at least point to a few blogs that we’ll add to our blogroll and that some readers might find interesting if they don’t already know about them.

First up: Shrink Rap. It’s a joint psychiatry blog by Dinah, ClinkShrink, and Roy that has been going for over 3 years, operating under the motto A place to talk, no one has to listen. (I hear ya.) Posts are typically short and zappy, and at least 1 in 3 will catch your attention if you’re interested in matters psychiatric at all. When I become a better person, I promise that I will be a more consistent reader of this one myself. Really, really, really.

Two recent posts worth checking out are Love Me, Love My Tattoos, which briefly discusses a Scientific American Mind study that explored the correlation between tattoos and a diagnosis of antisocial personality disorder. Guess what? There is one! But what’s the population base for that correlation, and what is the study really meant to show? The other post of interest is a little earlier, Over the Border Line, which is a rant on why the author (Dinah) hates the term “borderline” in psychiatric circles. The comments are at least as interesting as the post itself, as I think is not uncommon there. And you can also listen to any of about 50 podcasts they have up there under the heading “My Three Shrinks”. Go check it all out!