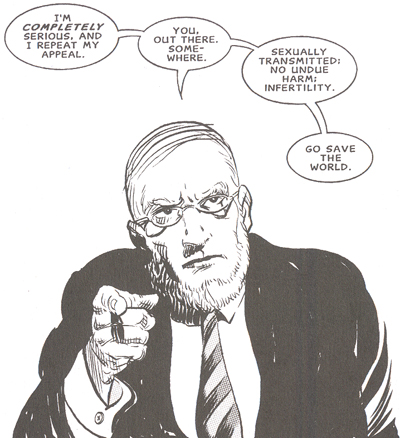 Randall Gordon, a character from Paul Chadwick's Concrete series, points his finger at YOU, a la Uncle Sam, with the following speech bubble: "I'm completely serious, and I repeat my appeal. You, out there. Somewhere. Sexually transmitted; no undue harm; infertility. Go save the world."

And so a tale already fraught with controversy unleashes an ethical bombshell…The character pointing directly at you is Randal Gordon, a character from Paul Chadwick’s award winning series of graphic novels, Concrete (I won’t bog you down with the entire back story for the series, but you can find a summary here; for an interview with the author about this story in particuler look here). Chadwick uses the series to explore a variety of social issues and the regularly feature an environmental message.  The tale I lifted this image from, The Human Dilemma, examines the question of just what should be done about our exploding population.  No mere “comic”, this particular series earned Chadwick the 2005 Eisner Award for Best Writer/Artist and made Time.com‘s best of 2005 list.

What Gordon is challenging the scientists of the world to create is a virus with three characteristics: it must be sexually transmitted; it can do no undue harm; it must leave its host (male or female) infertile.  Why?  He has two reasons, one explicit and the other implied.  The explicit reason is that the world is going to hell in such a big way that the devil herself couldn’t find a hand basket to fit it in.  Setting aside any question the specifics of the problem (e.g. the realities of global warming) there is little doubt that the world is struggling to bear the weight of our ever increasing population and its ravenous demand for resources (only lunatics from the far right would deny this).  Of course, everything would be fine if we would all just be happy with what we have and learn to share, but this is simply not going to happen (only lunatics from the far left would think otherwise). Things would also be better if people would simply stop having so many children.  This isn’t likely to happen either, no matter how much education and birth control you put into people’s hands.  People are going to have sex and some of the time this is going to result in children no matter how “careful” people are.  The solution to saving the planet from desecration through over-consumption is to curb and reverse population growth not by an appeal to people’s better judgment (which typically goes out the window when a little nookie is on the line) but through a technological innovation that will make all children the product of a conscious choice: the virus.  So goes the explicit reason.

The implicit reason?  Well, this is hidden a little behind the benefits that Gordon says success with the virus will bring:

Other than the point about eliminating the “timeless double standard” these benefits all amount to cleansing the world of the great unwashed such that only a certain kind of person will be left in the world: the morally virtuous.  Sure, directly sex related moral virtue would take center stage, but if Gordon’s vision was realized the supporting cast and chorus would be population with all the traditional family values that you can name.   “Every kid’ll have a village” and “…Neglect and abuse that cause sociopathy [will] vanish” combine to form more than an argument about crime reduction, they form the basis of a promise that all of the issues brought on by neglect and abuse will be massively reduced because people will actually care about children, whether their own or not.  The character of Randall Gordon is ultimately advocating a world with significantly less depression, anxiety, anorexia, bulemia, suicide attempts, panic disorder, dissociative disorders, attention-deficit/hyperactivity disorder, depression, anger, posttraumatic stress disorder, reactive attachment disorder, allergies, arthritis, asthma, bronchitis, and high blood pressure.  These issues would cease to exist to the degree to which they are caused by neglect and abuse due to children being unwanted by either their parents or society as a whole.  At least that seem to be implicit in Gordon’s plan.

Setting aside the techonological challenges and dangers that viral sterilization would bring (mousepox is held up as a cautionary tale by the story’s primary biologist) Gordon’s proposal raises a number of ethical issues.  Many of these are considered in the story, but one that isn’t is that the proposal amounts to a kind of eugenics.  What else would a program be called that is targeted at deciding who has children and who does not and, thus, who will carry on the species.  Unlike stereotypical eugenic programs this one is not directly targeted at physical characteristics or even psychological disease or illness and it doesn’t involve the killing of those already alive.  Its target is much more subtle, cutting across all people, regardless or race, creed, nationality and gender–virtue.  Granted, there is a degree–perhaps a strong one–to which the virtues promoted by Gordon are cultural phenomena that can be seen as privileges of resource access and power (and thereby tools of oppression), but let us separate such traditional eugenic foci as much as possible from the purely moral thrust on which Gordon’s position is based.

Is Gordon’s program (or one like it) justifiable, setting aside all possible outcomes as hypothetical (including interesting ones such as the possibility that those traditionally excluded from the gene-pool for not fitting in with social norms might become the arks of the human race) with the exception of the assumption that it would succeed in achieving a much more sustainable population size in the long term?

I want to say “Yes” but I just can’t quite bring myself to do it.  I want to say “No” but I just can’t quite bring myself to do it.  What I believe I am facing is a conflict of ethical values.  On the one hand there is an ethic based in the ecology of the natural environment that I am a part of with all living things on this planet.  I believe that we have a responsibility not to screw things up too bad for other beings, whatever they may be.  I believe that we have already over stepped our bounds and correction of some kind is clearly in order.  I also believe that this correction will only come via a crisis or something that forces us to “do the right thing.”  On the other hand there is an ethic based in personal freedom, choice and not committing or condoning acts, practices or institutions that remove the freedom of others to live their lives as they see fit. The diversity of choices expressed by people is a good above all others even if there are times when the consequences of these choices, either on the part of an individual or a mass, are less than desirable.

I’ll admit to this much though, put a gun to my head I’d choose to release the virus (Does that make me a eugenicist? Yikes!).  I know I’m not alone.

(Un?)Fortunately for both us and/or the world there is neither a gun to our heads nor a virus to unleash, only the hopes that one day a critical mass of conscientious people will take control of the world and set things right of their own volition or that there will be enough of the ecosystem left once we’re gone that life will go on. 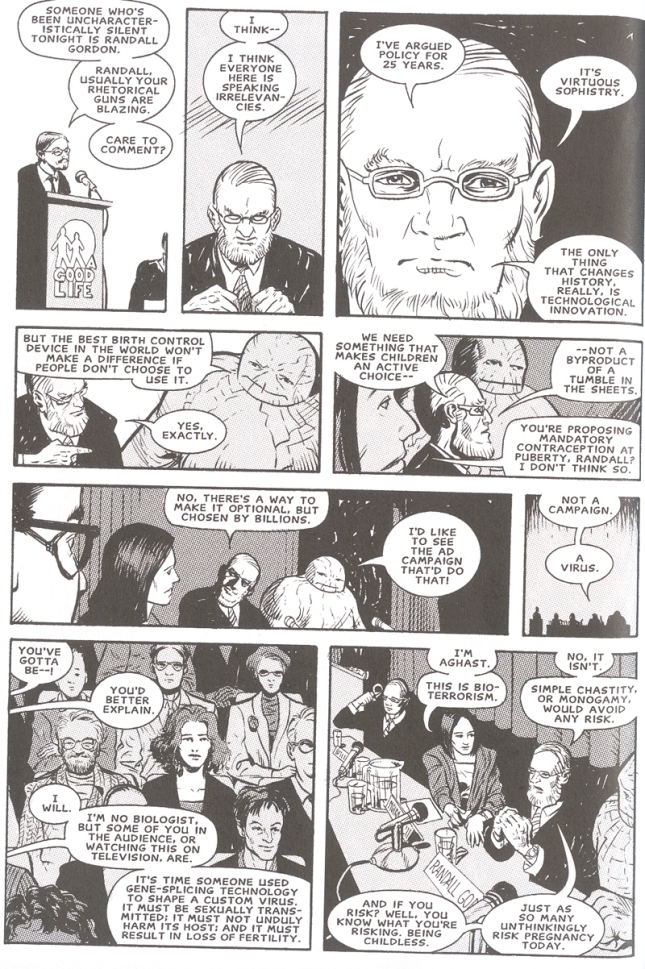 [If your curiosity is at all piqued by stories that are able to pull together compassionate and multi-level commentary on a wide range of social issues then I highly recommend that you check some of Paul Chadwick’s Concrete for yourself. Of course you have to be willing to “read” the pictures as well as the words that go with them.  Finding a copy of Concrete is now relatively easy to do since most (all?) of the stories have been collected together into a series of trade paperbacks which you can likely find in the adult graphic novel section of your local public library.  Before jumping straight to the story that this little rant is based on (Volume 7: The Human Dilemma) I recommend that you read the first volume since it sets up the back story and establishes the characters and plot.  Hell, through caution to the wind and read them all!  =) ]

Cover of "Concrete: The Human Dilemma"

PS – Happy Valentines Day! Be sure to go buy cards, flowers, chocolate, jewelery, ice cream, dinner, movies and what have you while driving all over the place to do it.

11 thoughts on “Saving the World with Viral Eugenics”