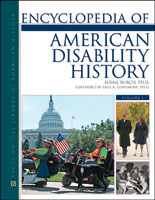 The new  1264-page Encyclopedia of American Disability History now appears to be shipping. Susan Burch is the editor of this massive, three volume Tome that retails for $295 (US) from Facts on File.  Burch is well known for her work in deafness, such as Signs of Resistance: American Deaf Cultural History, 1900 to World War II as well as her work more generally in the history of disability. Paul Longmore has also contributed a foreword to the book, and there is a very long list of contributors. Even I got to write a few entries,  including biographical pieces on two of my favorite people Barabara Waxman-Fiduccia and Dale Evans Rogers.

This blog entry isn’t intended as a review of the encyclopedia, and it’s certainly not intended as advertising. In fact, I’ve only had a chance to look at a small part of its massive contents. But I do want to bring it to the attention of Whatsorters because there are a number of interesting entries that touch on the fundamental What-Sorts question.

J. David Smith’s entries on Chang and Eng Bunker and on Carrie Buck are good examples. I found Penny Richard’s biography of Thomas Cameron (1806-1870) to be very interesting. It suggests that Cameron was an individual, who would be diagnosed with an intellectual disability in today’s world, but that since the concept of mild or moderate intellectual disabilities hadn’t been popularized in that time, he led a more normal life, “in his own time, Cameron had no educational label.”

Sausan Burch’s own entry on Junius Wilson certainly spells out eugenic horrors in the black and white of racism and the red of spilled blood. Wilson, who was deaf, was institutionalized in the State Hospital for the Colored Insane as a mental defective for 76 years and castrated in North Carolina.

The Encyclopedia is still new. Hopefully, it will start to appear in libraries, either in paper or electronic format.