How do technologies that claim they will change our bodies and minds challenge our views of disability and normalcy? How might this affect what it means to be human in the twenty-first century?

These are the questions tackled in FIXED: The Science/Fiction of Human Enhancement. It’s a haunting, subtle, urgent documentary that takes a close look at the drive to be “better than human” and the radical technological innovations that some are advocating we embrace. Producer/director Regan Brashear has working on labor, race, youth, LGBTQ, and disability issues for over twenty years through documentary film, union organizing, community forums, and grassroots activism. She is co-founder of Making Change Media, which produces videos for non-profits and labor unions, as well as independent long-form documentaries such as FIXED.

Regan will be interviewed by Gina Maranto, Director of Ecosystem Science and Policy at the University of Miami’s Leonard and Jayne Abess Center, and author of Quest for Perfection: The Drive to Breed Better Human Beings.  Please join us on Thursday October 3 at 11 am PT/ Noon MST / 2 pm ET for Talking Biopolitics a live web-based interview and conversation with Regan Brashnear, Gina Maranto, and you.

Registration is required! You can register here: registration. You can read more about the film and Regan and Gina here

The Living Archives on Eugenics in Western Canada is hosting the Alberta Premiere of FIXED: The Science/Fiction of Human Enhancement with co-sponsors the Faculty of Rehabilitation Medicine and the John Dossetor Health Ethics Centre, University of Alberta, on Friday October 18, 2013 at the Telus Centre 150, University of Alberta. Doors at 6:30 pm, film at 7:00 pm. Dr. Gregor Wolbring will join us after the film for questions and answers via SKYPE. Admission is FREE and this event is open to the public! Plan to attend!

Some of Aimee Mullins' legs

Oakland-based filmmaker Regan Brashear is launching her film FIXED: The Science / Fiction of Human Enhancement and is running a Kickstarter campaign to help with funding for the film’s clean-up.  You can start with donations of $1 and up–details about the campaign and film here.  The campaign runs until 9.03am EDT, August 31, so donate NOW.  A brief excerpt from the site:

What’s the film about?  What does “disabled” mean when a man with no legs can run faster than many Olympic sprinters? With prenatal screening able to predict hundreds of probable conditions, who should determine what kind of people get to be born? If you could augment your body’s abilities in any way imaginable, what would you do and why? From pre-implantation genetic diagnosis to neural implants and bionic limbs, researchers around the world are hard at work developing a myriad of technologies to fix or enhance the human body, but what does it mean to design “better humans” and do we want to? FIXED follows three remarkable people: END_OF_DOCUMENT_TOKEN_TO_BE_REPLACED

from the NYT, July 28th, an Op-Ed piece by bioethicist Carl Elliott:

LAST month, the Archives of Internal Medicine published a scathing reassessment of a 12-year-old research study of Neurontin, a seizure drug made by Pfizer. The study, which had included more than 2,700 subjects and was carried out by Parke-Davis (now part of Pfizer), was notable for how poorly it was conducted. The investigators were inexperienced and untrained, and the design of the study was so flawed it generated few if any useful conclusions. Even more alarming, 11 patients in the study died and 73 more experienced “serious adverse events.” Yet there have been few headlines, no demands for sanctions or apologies, no national bioethics commissions pledging to investigate. Why not?

Here is the complete article.

Is your dog on Prozac?

PZ Meyers on the enhancement of sexual morality: a modest proposal

The ethics of exclusion, the morality of abortion, and animals

A fairytale for my grandchildren

In this post, I pointed to a new technique for regrowing limbs that makes use of “Pixie Dust” to accomplish the seemingly impossible: regrowing the entire tip of a man’s finger.  It prompted the question, “Could we do more?”  To find out, watch this short video from Newsweek.  It features Shilo Harris, a man who suffered the loss of two fingers and extensive burns durring an IED explosion and a discussion of both the treatment he received and the progress that was made.

The editors of Skin, Culture and Psychoanalysis invite contributions for an interdisciplinary collection on the cultural politics and psychoanalysis of skin. We welcome papers that unhinge skin from the biological sciences to examine its layers of significance by way of social and psychoanalytic critique. Skin is the first and enduring medium through which we encounter the world. It delimits interiority and exteriority and, consequently, our relationships to self and others. Skin is laden with unconscious meanings and those we attach to it with respect to gender, sexuality, ‘race’ and racialization, religion, nationality, class, and dis/ability. Moreover, as both “screen” and “container,” skin functions to simultaneously reveal and hide the ways we negotiate identity, body and culture. Perhaps due to these complexities, skin remains an under-theorized yet productive site of inquiry.     END_OF_DOCUMENT_TOKEN_TO_BE_REPLACED

Photo of the Wicked Witch of the West (with lovely green hands and face) from the Hollywood film “The Wizard of Oz.”  Everett Collection

IT would be close to impossible to tally all the magazine articles, scholarly treatises and philosophical works, reality shows and Internet sites, college courses, lectures and books devoted to the subject of beauty.

But what about ugliness?

It is an awkward topic, a wretched concept, really, and, of course, a terrible insult when flung in your direction.  When a woman once told Winston Churchill he was drunk, he is said to have replied: “And you, madam, are ugly. But I shall be sober tomorrow, whereas you will still be ugly.”

Ugliness is associated with evil and fear, with villains and monsters: the Wicked Witch of the West, Freddy Krueger and Harry Potter’s arch-meanie, Lord Voldemort, with his veiny skull, creepy slits in his nose for nostrils and rotten teeth.  There are the gentle souls, too, plagued through no fault of their own by their disturbing appearance: Dr. Frankenstein’s monster, the Elephant Man and Shrek, who is ugly and green but in a cute way.

Ugliness has recently emerged as a serious subject of study and academic interest unto itself, in some small part because of the success of television’s “Ugly Betty,” which ABC promoted with a “Be Ugly” campaign stressing self-esteem for girls and young women. Sociologists, writers, lawyers and economists have begun to examine ugliness, suggesting that the subject has been marginalized in history and that discrimination against the unattractive, while difficult to document or prevent, is a quiet but widespread injustice.

Researchers who have tried to measure appearance discrimination, or “uglyism” and “looksism,” and the impact of what they call the “beauty premium” and the “plainness penalty” on income, say that the time has come for ugly to peek out from beauty’s shadow.

An ex-student of mine pointed me to this blog on media, communication, the body, and drugs,The Banana Peel Project. I have enjoyed it the last few weeks and so may you.

Chris Kelty over at the excellent anthropological blog Savage Minds has written a thought provoking piece on why and how anthropologists should engage with transhumanism. He notes that current critiques may be sound but may be missing the boat not only when it comes to some broader ethical questions but when it comes to even identifying the locus and importance of transhumanism. I have provided a short snippet below:

Most of the critiques of transhumanism center around its more speculative aspects, like the notion of the singularity, the emergence of artificial intelligence etc. But I think there is increasingly an opening here for thinking about what we do and what we do not have control over as humanity evolves. END_OF_DOCUMENT_TOKEN_TO_BE_REPLACED

Bloggingheads.tv threw up an interesting piece last week that begins with a discussion surrounding obesity (The entire segment is titled “The Skinny on Obesity“, but note in advance that the conversation is less focused than the title implies; they switch topics and discuss carbon emission regulations for the last half). I was struck by a number of the claims that were made throughout this discussion and most particularly by the way that later comments contrasted with earlier ones. It is in this contrast, especially given the subject matter, that I believe there is a valuable lesson regarding how we should view answers to the question “What sorts of people should there be?” END_OF_DOCUMENT_TOKEN_TO_BE_REPLACED

Suppose that there is a problem case–let’s call it the Zoey case–of extreme, uncontrolled biting behaviors that pose serious risks to others. Then we might imagine the following snippet from a clinician’s consultation with Zoey’s guardians:

If we were to ask Zoey: ‘Look, if you slip up in the future, and you bite someone like that again, the chances are you’re not going to come out of it alive. But we can make you feel better if we give you some medicine like, for example, Prozac. Would you like to have the medicine that might save your life?’ 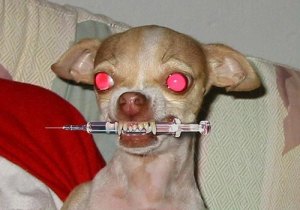 Your dog on drugs

Perhaps melodramatic? Not so, given that Zoey is a 5-year old, muzzled dog brought in to the office of Nicholas Dodman by her concerned owners for a psychiatric evaluation! The quote above contains words of advice that Dodman begins his consultation with.

This comes from a recent New York Times Magazine article by James Vlahos, Pill-Popping Pets. Although it rambles in places, bringing in everything from the origins of cognitive ethology to Thomas Nagel’s “What’s it like to be a bat?”, it’s worth a read, especially if it’s a rainy Sunday afternoon. END_OF_DOCUMENT_TOKEN_TO_BE_REPLACED