Sweden, “one of 17 [countries] in the European Union,” may soon change a law that requires transgendered people to become sexually sterilized if they decide to officially change gender.  Sweden has made moves to repeal the law in January, only to be stopped by the Christian Democrat Party.  However, this party has recently changed their mind, allowing the repeal to go through.

This move was partially in thanks to an online petition, by AllOut (http://allout.org/en/actions/stop_forced_sterilization), which gained 80,000 international signatures to repeal the law.  However, the date for repealing the law is still pending.

Countries that still require sterilization include France, Italy, Romania, Poland, Greece, and Portugal.  For a map outlining the current status of European sterilization, you can link here: http://motherjones.com/mojo/2012/02/most-european-countries-force-sterilization-transgender-people-map 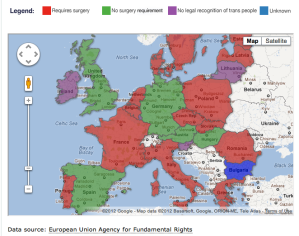