Barbara Farlow has emailed to inform us about a recent publication in Pediatrics which gives a voice to parents and their children, like Annie, who have trisomy 13/18. Here are a few related links:

The news release from the University of Montreal: http://www.nouvelles.umontreal.ca/udem-news/news/20120723-children-with-trisomy-13-and-18-and-their-families-are-happy.html
Journal Abstract: http://pediatrics.aappublications.org/content/early/2012/07/18/peds.2012-0151.abstract

And a few videos about children with trisomy: 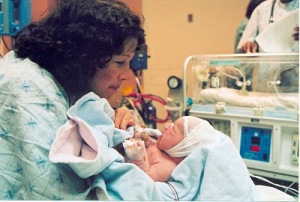 There’s a recent interview with Barb Farlow up at Bloom–Parenting Kids with Disabilities–by Louise Kinross. It starts with the following background information:

When Barb Farlow learned the baby she was carrying had Trisomy 13, her decision to continue the pregnancy “was immediate and innate, and in complete contrast to what I thought I might do,” says the Toronto mother and engineer. She was told the syndrome was lethal, but through online support groups met families whose children were living with Trisomy 13. “It was very important to us that she not suffer unnecessarily, but we wanted to consider any surgical treatments and make ‘best-interest’ decisions for her, like any parent.”

Barb’s daughter Annie (above) was born without the brain and heart defects common in Trisomy 13, but died at 80 days in 2005 after being rushed to a children’s hospital in respiratory distress. Following her death, Barb acquired Annie’s medical records and learned a “not for intubation” order had been written without consent. “This discovery was like the first domino in a long line of questionable events that left us unclear as to whether our daughter’s death was preventable.” Determined to change what she believes is systemic discrimination against treating children with certain genetic conditions, Barb shares Annie’s story at health-care conferences and ethics talks, with medical and law students, in medical journals and through her work with Patients for Patient Safety Canada.

To read the interview itself, which is informative about how Barb and Annie were treated within the medical establishment, including by medical staff at one of Canada’s leading hospitals for sick children, click here.

I’m re-posting this May 15th post, since Disrespect has just re-run an interview with Sam Sansalone about his daughter Katya from earlier this year. The directions below will allow you to get to Sam’s interview, which was re-run on 22nd October; the podcast should be up there for the next few weeks. The two are related not only in that the children have the same genetic condition, but were also treated in similar ways by the same hospital.

Below is the original blog post on the interview that DisRespect did in May 2009 with Barb Farlow and me on Barb’s daughter, Annie Farlow; it includes a transcript of the interview. If you want to see the footage of the talk that Sam gave, referred to in his interview, you can go to the post The Modern Pursuit of Human Perfection: The Full Story and then click on the two Living with Trisomy 13 posts within it. These videos are all now closed captioned and also include transcripts, thanks to Jackie Ostrem

Many of you have likely been following the case of Annie Farlow (Here is a listing of all our Annie Farlow posts) and were looking forward to listening to yesterday’s radio interview of Barb Farlow and Rob Wilson by Geoff Langhorne. If you are unfamiliar with the case then this interview should provide a succinct introduction to the details of the case in an accessible form. The one thing perhaps unclear in the interview is that Annie was NOT a newborn, but 80 days old, and went in to the hospital 24 hours before her unexpected death. You can also get more from the recently-formed Justice for Annie Facebook group, which you’re welcome to join (it’s a closed group, which means you have to apply to join it), and the Annie Farlow website linked there.

The interview was broadcast on the CFMU (McMaster Unversity Radio) program DisRespect (Here is a little about the show and the program’s host) and is available for listening/download by doing the following:

Many of you have likely been following the case of Annie Farlow (Here is a listing of all our Annie Farlow posts) and were looking forward to listening to yesterday’s radio interview of Barb Farlow and Rob Wilson by Geoff Langhorne. If you are unfamiliar with the case then this interview should provide a succinct introduction to the details of the case in an accessible form. The one thing perhaps unclear in the interview is that Annie was NOT a newborn, but 80 days old, and went in to the hospital 24 hours before her unexpected death.  You can also get more from the recently-formed Justice for Annie Facebook group, which you’re welcome to join (it’s an open group), and the Annie Farlow website linked there.

The interview was broadcast on the CFMU (McMaster Unversity Radio) program DisRespect (Here is a little about the show and the program’s host) and is available for listening/download by doing the following:

An unofficial transcript of the broadcast follows:

Unofficial transcript from DisRespect, with Geoff Langhorne, 14th May, 2009

Geoff: DisRespect welcomes Rob Wilson, who is a professor at the University of Alberta in philosophy is it Rob?,

Geoff: and coordinator with the What Sorts of People Network in Alberta, and Barb Farlow, who was a mechanical engineer and is now an advocate on behalf of people with disabilities in Ontario. Welcome to the show.

Rob: Thanks for having us.

Geoff: Ok. Barb, this concern that brought you together with Rob started with an incident in your life that our listeners might not be aware of. Do you want to give us the once over lightly?

Barb: Sure, I’ll give you the brief version, Geoff. My daughter died in August of 2005 within 24 hours of arrival at the Hospital for Sick Children. Annie had a genetic condition that was related to disability. Generally the condition comes with very serious anomalies that are considered lethal, such as severe brain defects. However, like all genetic conditions there are a wide range that exist, and my daughter was mildly afflicted. We knew that we would have difficult decisions to make before she was born and ironically we had many meetings at the hospital, specifically to discuss policies and eligibilities for surgery, and ethics and what would happen if this and what if that because we really needed to understand the medical system so that we could properly manage our daughter’s heath within its confines. Once we were assured of the policies, her rights, the ethics, the matter in which any ethical disputes or dilemmas would be resolved, we placed our entire trust in the system. END_OF_DOCUMENT_TOKEN_TO_BE_REPLACED

for Blogging Against Disablism Day thanks to Diary of a Goldfish!

There’s a word for that kind of thing

when a newborn is treated as another pending, tragic statistic because her genetic diagnosis arrives before she does

when lethal doses of medication go mysteriously missing from a diagnosed infant’s medication cabinet, along with the usually meticulously kept medication reports, shortly before that infant dies

when a coroner’s office is unwilling to fulfill its duty to release crucial medical information to family members in the suspicious death of an infant, or to answer basic questions about the case

when we sit by

in memory of Annie Farlow

A recent news item in the Canadian Medical Association Journal by Roger Collier, Prenatal DNA test raises both hope and worries, discusses the relatively new prenatal diagnostic technique of chromosomal microarray analysis, contextualized by the case of Annie Farlow, which we have discussed in the posts What Sort of Death for Annie? and Deathmaking by medical neglect. Some think that Annie’s fate was sealed by her diagnosis of trisomy 13, not so much because of the nature of the condition itself but because of the downstream effects that labeling had on the medical treatment she received (or not). As the article says,

In August 2005, Annie, not yet 3 months old, suffered a respiratory attack and was admitted to hospital. She died within 24 hours. The official cause was “complications of trisomy 13,” but Farlow and her husband still don’t know the details, despite years of inquiry. They do know, however, that someone issued a do-not-resuscitate order without their consent. “I feel that the genetic testing ultimately determined her fate,” says Farlow, who lives in Mississauga, Ontario. “She was treated as a syndrome. She wasn’t treated as a child.”

END_OF_DOCUMENT_TOKEN_TO_BE_REPLACED

Below are all 13 posts from our Modern Pursuit series of posts, deriving from the public dialogue that we cosponsored with the AACL and the CACL at the University of Alberta in October 2008. The public dialogue began with some opening comments from our cosponsors, continued with short presentations from our community member panelists talking of their personal experiences, and was rounded out by a series of interchanges between audience and panel. All videos now contain transcripts (thanks to Jackie Ostrem for completing the work needed here: update 21 June, 2009: all now are closed captioned, thanks again Jackie!), and the videos are also available on YouTube. Comments on the blog on any of these posts is still welcome, but we also hope that you’ll find these of interest and use down the track for individual reflection or group discussion.

Thanks to all participants: Anna Macquarrie, Bruce Uditsky, Dick Sobsey, Wendy Macdonald, Sam Sansalone, Colleen Campbell, Anne Hughson, and Simo Vehmas. And thanks to Grant Wang and Lee Ramsdell at the Arts Resource Centre at the University of Alberta for the filming and post-production work, and John Simpson for organizational assistance.

My doctor, my child

Living with trisomy 13, part I

Decisions and dishonesty in medicine

Good people in medicine and the disconnect

The denial of parenthood and selective abortion

[This is the fourth post in a series highlighting a public dialogue held at the University of Alberta on October 23rd, 2008, titled The Modern Pursuit of Human Perfection: Defining Who is Worthy of Life. It is also the second part of a description of events given by Sam Sansalone. The first part can be found here. The dialogue was sponsored by the What Sorts Network, in conjunction with the Canadian Association for Community Living and the Alberta Association for Community Living. This series will bring forward the videos made of this event twice a week, roughly every Wednesday and Saturday. For further context, please see the introductory post in the series, which can be found here; we’ll string together all posts in this series when we have most / all of them up.]

In this video (followed by a transcript) Sam Sansalone continues to describe his experiences trying to keep his daughter, Katya, alive. This part of the story is focused around a monitor necessary to keep Katya alive. The hospital staff clearly recognize that this piece of equipment is needed but seem somewhat reluctant to allow Katya to use the monitor, possibly even arranging a situation where a less medically savvy couple than Sam and his wife would choose to give up the monitor without realizing the consequences (ie. their child quietly choking to death while they slept). Fortunately, the missing monitor is caught and Katya is able to continue living.

As far as we know Katya is the oldest surviving child in Canada to have received a Trisomy 13 diagnosis and Sam closes by sharing his thoughts about why this may be the case.

Watch the video and answer the accompanying poll: END_OF_DOCUMENT_TOKEN_TO_BE_REPLACED